Unusually for a Defence Digital blog, I’ve going to start by talking about the culture of the French Artillery at the end of the 19th century and their influence on the Royal Artillery of 1914. And that’s because whilst I’m part of the team orchestrating Programme THEIA, the Army’s Digital Transformation – I’m also about to study History as one of the Chief of the General Staff’s fellows.

The French Artillery were the superstars of the French Army at the turn of the last century. Known as the ‘Virtuosos’, their bravado came from their world leading, technologically cutting-edge, ‘quick firing’ gun, the 75mm. Such was the capability of the gun and the French reputation that in 1910 the British General Staff became concerned that young Royal Artillery Officers were publicly belittling their own Regiment in comparison to the French. Fast forward a few years and on the Mons to Charleroi road on 22nd August 1914, E Battery, Royal Horse Artillery fired the first British artillery round of the First World War.

But, what on earth has this got to do with a 21st century digital transformation designed to deliver a step change in the way the Army operates and one of the pillars of the Integrated Review?

Actually, there are two lessons. The first is that when E Battery sited their guns on that day in August, they did so on a forward slope and engaged the Germans in direct fire, taking huge casualties. Just as Gunners had done 50km and 99 years earlier, at the Battle of Waterloo. Shortly, before E Battery came into action, Capt Charles Hornby of the 4th Royal Irish Dragoon Guards led a cavalry charge which reputedly resulted in him killing a German soldier with his sword. The lesson from history would seem to be a warning, if you prepare to fight the last war, you’ll be doomed to be casualties of the next war.

The Army’s digital transformation is therefore making the necessary preparation for future conflict. A digital backbone will be fundamental to the Army’s ability to operate and fight; harness exquisite platforms from other domains to achieve Integrated Action in the Land Environment and contribute towards Multi Domain Integration with all-important and omnipresent allies. It will allow manned and autonomous sensors, weapons and deciders to be a living organism - adaptive, fast, self-healing. This will be a game changer for command and control, with the potential for any sensor – something that looks and listens and collects data – to be aligned by any authorised decision-maker (a human or an algorithm) to any effector – technologies that change the properties of a target. 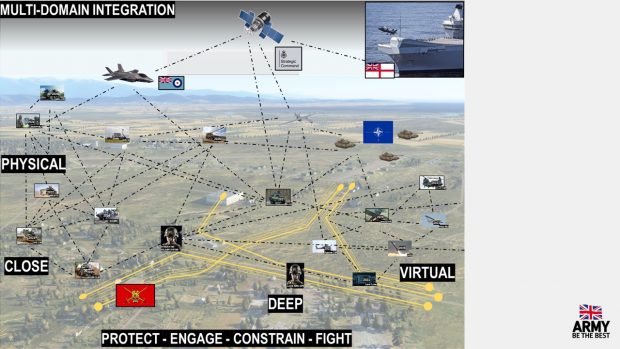 There is a second, possibly more valuable lesson from the Gunners of the First World War. British doctrine, shaped by the Boer War, recognised the value of direct fire to providing close support and reassurance to the infantry. However, on balance official doctrine was to engage indirectly, from the reverse slope, to protect against counter-battery fire. Therefore, E Battery possibly reflects the prevailing French artillery culture.

For all their glamour and panache, the French artillery were blinded by their technological superiority. They had neglected the doctrine and training to engage targets in indirect fire and protect against counter battery fire. And the culture was infectious. Despite some successes in the early days of the First World War, this conceit cost both the French and British armies dearly.

The lesson of culture is clear. And is as crucial for the digital transformation that underpins the Soldier of 2021 as it was damaging for the Soldier of 1914.

Data may or may not be the new oil, but it is undeniably vital ground in 21st century conflict.  In the traditional ‘fire and movement’ of ground manoeuvre, ammunition is the asset. In information manoeuvre, data is the asset. When data is integrated with technology and procedures, it allows reduced exposure to some of the physical risks of the soldier and enables the force size to be smaller. Most importantly it enhances the Army’s ability to compete and win; driving integrated hard and soft effects that are timely, accurate and lethal across maritime, land, air, space and cyber. So we must improve the quality of our decision making data and actually use it to make quicker, better decisions. And that starts now, in everything we do. Because culture is what we do every day. And when the chips are down, we’ll fall back on what we normally do. The Army’s digital transformation, THEIA, is there to ensure we are trained, equipped and ready to fight tomorrow’s conflicts. But, the Army needs to buy into it and change its culture from within.

Because if the culture hasn’t changed since the last war and the adversary has moved on, we’ll suffer as the British Expeditionary Force of 1914 suffered. If not worse.